PlanSwift, by ConstructConnect, is a cloud-based takeoff and estimating solution designed for commercial and residential contractors, subcontractors, and estimators within the HVAC, drywall, electrical, concrete, plumbing industries. Contractors and estimators can create digital assemblies and utilize drag and drop capabilities to combine assemblies with takeoff items and propose accurate estimates.

With PlanSwift, users can streamline the takeoff process just by using point and click functionality to measure areas, items, lengths, volumes, and perimeters within a matter of seconds. Drag-and-drop capabilities allow users to drag pre-configured or newly created assemblies onto takeoff items to calculate material, waste, and labor costs and expenses. For any project change, PlanSwift is able to adjust cost projections, change product cost and recalculate expenses on a whim. 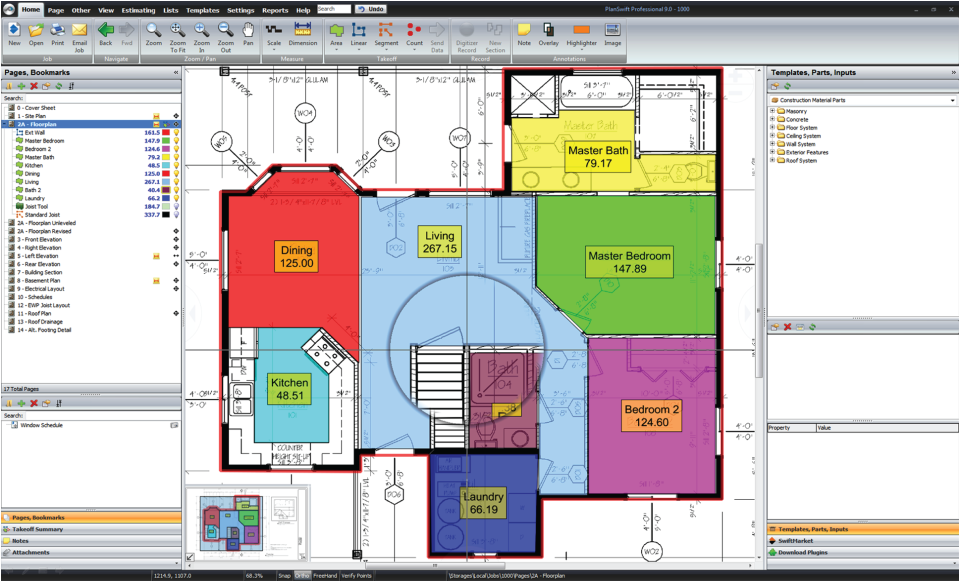 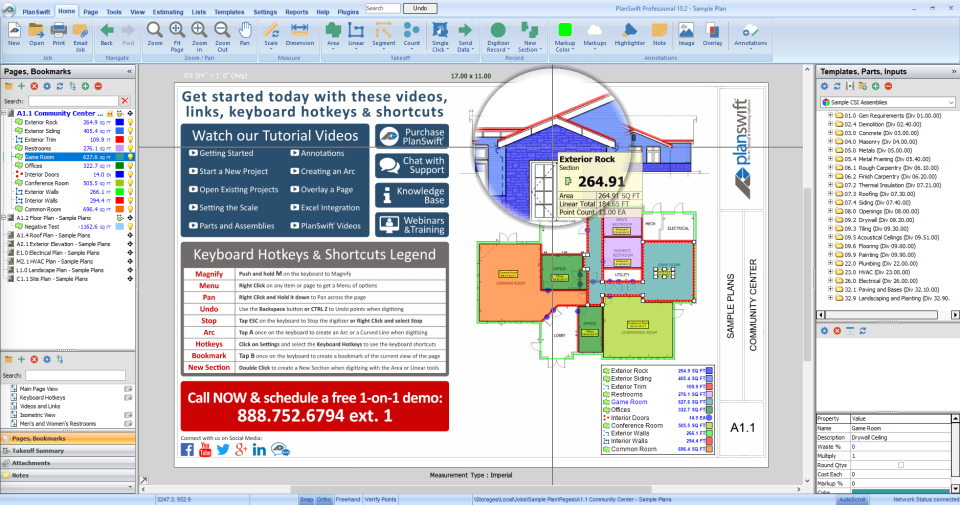 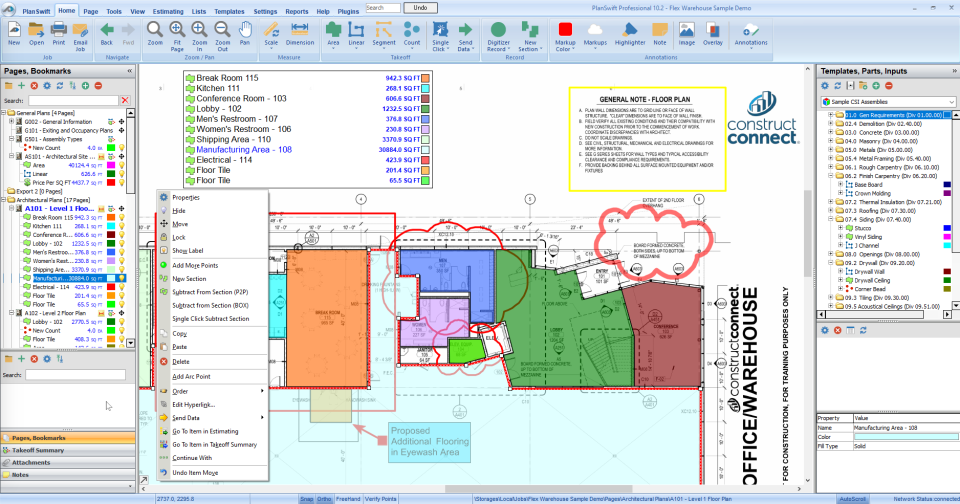 3.7
#3 Alternative to PlanSwift
Accubid Anywhere by Trimble is a SaaS hosted estimating software for businesses within the manufacturing and constructio...
Learn More Compare

One time fee may be expensive for some, but it is well worth the investment!

It's A Love/Hate Relationship

Like the title says, it's a love/hate relationship. Lots of really powerful features, but it's...

Like the title says, it's a love/hate relationship. Lots of really powerful features, but it's really outdated and lacking some modern cloud syncing features and others talked about in the Cons list.

It's extremely in-depth and you can do almost anything you can imagine. The tools to build parts and assemblies are extremely extensive and haven't found anything we can't do. Other than a handful of bids that we send out for, we estimate the entire home for each client. Every single nut, bolt, box of screws, rebar, rolls of house wrap, etc. There's nothing we can't do. The

Terrible customer service! I usually call and have to leave a message and someone might get back to me in 24-48 hours. They don't seem to know their software well either as we were able to figure out things that they said wasn't possible...

No built-in cloud syncing between computers. If there is a change in pricing, adding parts, building assemblies, etc. for a while we had to manually do this in each computer. We ended up figuring out how to utilize a cloud platform to sync up all changes to our parts and assemblies across computers and it now works now.

No built-in Job file sharing. Again, we set up a cloud system using Google Drive local sync and it works well. We just can't be in the same job at the same time or it might get errors.

There is no automatic association between a part in a parts list and the same part in an assembly. For instance, by default, if I update a price in the parts list it doesn't reflect that price update in any instance of the part used on an assembly. You have to use a $200 plugin that basically adds a search and replace function.

Price changes on parts are not reflected in current jobs unless you manually go in and change it. We found a workaround for this though. For all of our assemblies, we were able to link the "Cost Each" back to the original part's "Cost Each" through a file path. Just a pain.

I ran out of room to type so I must stop here..

Reasons for Switching to PlanSwift

We actually tried switching to STACK and it had a lot of really good modern features, but it just lacked the powerful and in-depth tools that PlanSwift has. We just couldn't build extensive assemblies and things to the detail we like with STACK. It also lacked a lot of built-in reporting features, no rounding up option built-in, limitations on exporting to Excel, etc. STACK's Support team is incredible though! And they are always adding features on almost a weekly basis. PlanSwift only does an update like once a year... It's terrible. The software looks the same and has the same tools from 10 years ago. Not much improvement since... We really hope that someday STACK will get to a point that we could switch to them. ProEst is just too pricey and weren't impressed by reviews. So we never even tried it.
Scott
Overall rating

I've been a Planswift user for last 8 years. The program has a lot of bells and whistles with so...

I've been a Planswift user for last 8 years. The program has a lot of bells and whistles with so many custom options. Its a rather incredible concept but some of the tools like hip/valley tool, comparative overlay and auto count don't work properly. My number one issue with plan swift is the code. I complained about how slow the program would get after just a few hours of measurements, especially when using a lot of joint tool and overlays. I would mostly get silence from customer support when making that comment, it seemed odd but I didn't put much thought into it and just kept upgrading hardware on my PC to compensate. Well, now I have a computer that could animate for Pixar yet Planswift still shows me its hourglass mocking the value of my time. I also noticed it would crash more often than I find reasonable and will also crash excel when open even if not using Planswift at the time. When this would happen, excel was unable to recover my progress in that worksheet. VERY frustrating. So, I started to look into composing better spreadsheet design do compensate. I went to an excel guru with estimating background and after just several hours we were both unsure of how we were to make chicken salad out of the fodder. I decided to go shopping, there are tons of in screen programs out there but if you want takeoff with legends to be able to efficiently convey that fancy estimate you spent hours and days putting together to a team on the forld, there are very few that do it well. Most do not have a joist tool or hip/valley intelligence and many other features Planswift has. But most all the others are faster than P.S. and will allow you to work on multiple jobs at same time (P.S. does not). For the light user on a budget, this could be your ticket and I will gladly sell you one of the four P.S. Licenses I am currently sitting on. But if you want to do whole project estimating that is visually auditable with reliable output that won't slow you down and actually speed this boring, low-to-no paying process down then I suggest you search elsewhere. I found my dream software by mixing tei that have most of what Planswift does combined. But mega faster, without crashing or ever hour classing and better reports I do t have to spend hours cleaning up after exporting.

As an estimator, I would definitely choose PlanSwift all the time when it comes to construction...

As an estimator, I would definitely choose PlanSwift all the time when it comes to construction estimation and takeoffs. It is very efficient and user-friendly, making me more productive in my work.

What I like the most about this software is its takeoff accuracy. I can even set my own scale depending on the plans I have, especially if my Client/Consultant did not give the preset scale.

Even with its efficient features, PlanSwift is not exempted from having drawbacks, just like any other software. Being able to markup shapes like arrows and circles might be more useful for estimators like me since I won't have to transfer to other PDF readers just to put shape markups.

Overall, I would recommend Planswift to a friend if they are starting out with estimating because...

Overall, I would recommend Planswift to a friend if they are starting out with estimating because it is easy to use.
I do wish there was an online/ cloud base option that saved in real time so it was automatically updated as adjustments to takeoffs are made. - that would be very helpful for me and my company

I love that the takeoff can be scaled to fill in your footing lines etc, the takeoff system is very easy to use & learn.

The customer service is lacking, anytime there was an issue it could take up to 3 days to have someone call back to resolve the issue.

There isn't an automatic save option, you will need to save the takeoff after each revision.

Thank you so much for your sincere review. We take pride in providing good service, so I will be forwarding this feedback to the team. We value you and your business very much. Thank you

Showing 5 reviews of 389 Read all reviews

Q. What type of pricing plans does PlanSwift offer?

Q. Who are the typical users of PlanSwift?

PlanSwift has the following typical customers:

Q. What languages does PlanSwift support?

Q. What other apps does PlanSwift integrate with?

We do not have any information about what integrations PlanSwift has

Q. What level of support does PlanSwift offer?