Instant, interest-free credit is now available at the checkout of many online stores, but are consumers using it, do they like it, and is it affecting how they shop? We surveyed over 1,000 consumers in Canada to find out. 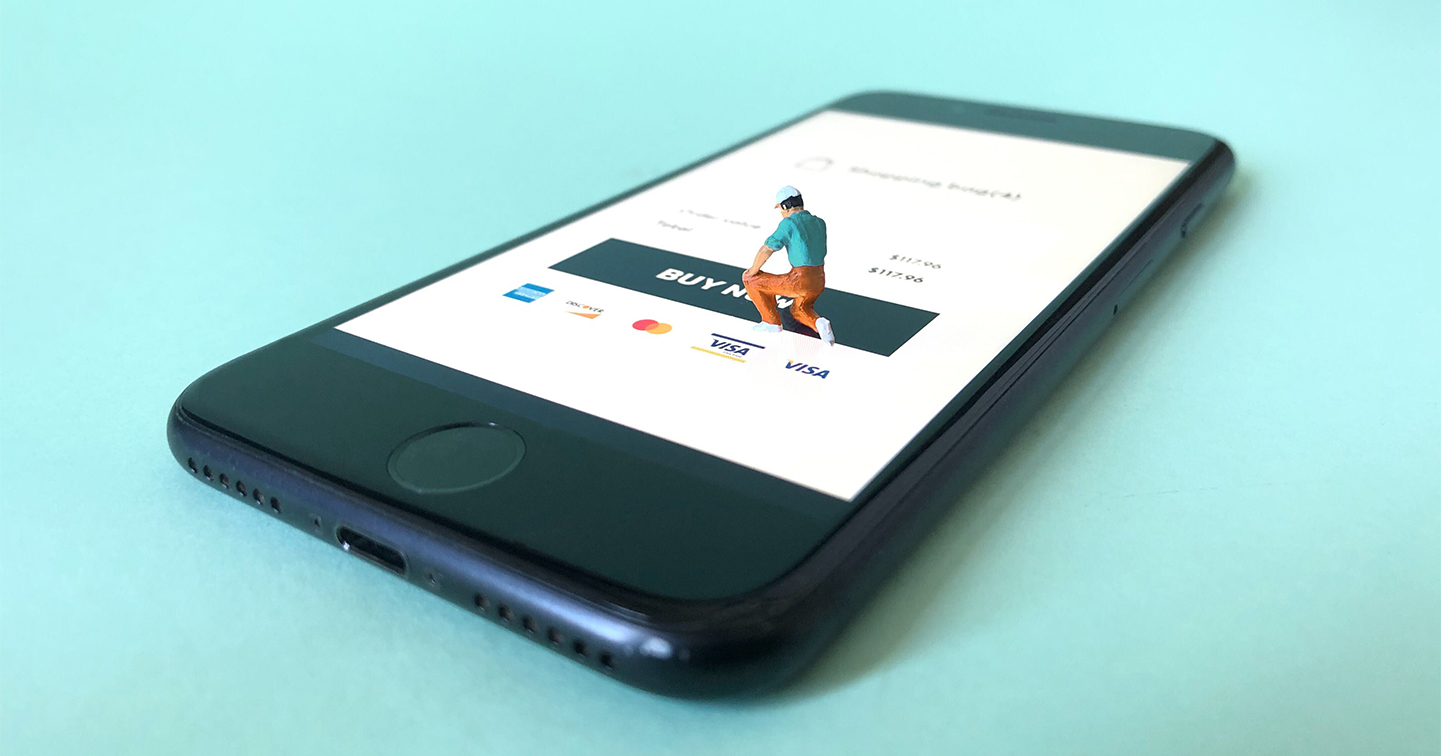 What we will cover

Buy now, pay later (BNPL) services offer consumers interest-free credit at the checkout— both online and in store. In theory, these services make it easier for consumers to get the goods they want quickly and spread the payments over the coming months.

Depending on how consumers feel about them, offering these services could be a useful addition to eCommerce stores for small to midsize enterprises (SMEs). So, to find out how online shoppers have taken to BNPL and whether it has affected their shopping habits, we surveyed over 1,000 consumers in Canada as part of our larger eCommerce study. You can read part one of the survey here, and scroll down to the bottom of this article for a full methodology.

For the purposes of this survey, we excluded traditional forms of credit, such as credit cards and bank loans, from our definition:

Buy now, pay later (BNPL) is a type of short-term financing that allows consumers to make purchases and pay for them at a future date, often interest-free. There are a number of companies that offer buy now, pay later financing on purchases made from participating merchants. If a buyer fails to pay back the amount in the repayment window, however, the lender will charge interest on the unpaid amount. There may also be late payment fees.

According to PR Newswire, BNPL payments in Canada are expected to grow 63.5% in 2022. CBC reports that these small, point-of-sale loans are especially popular with younger consumers, their success being driven by easy accessibility and promotion through social media influencers.

Did you know? SMEs looking to start an online store should explore how eCommerce software can help. These solutions make it possible to set up, run, and grow your web-based business. There are tools to automate all the common tasks involved with online retail. Plus, the software can integrate with payment processing software and solutions provided by BNPL providers, making it easier to offer the payment methods your customers prefer.

Just over one in five (22%) of the people we surveyed said they have used BNPL services in the past. This figure is relatively low compared to credit cards, which are used by 95% of consumers in some capacity— and by 29% for all purchases.

However, despite the modest rate of BNPL adoption seen in our survey, respondents do seem amenable to the idea. Most said they were interested in using such services in the future, and 3 in 4 consider BNPL providers to be trustworthy. 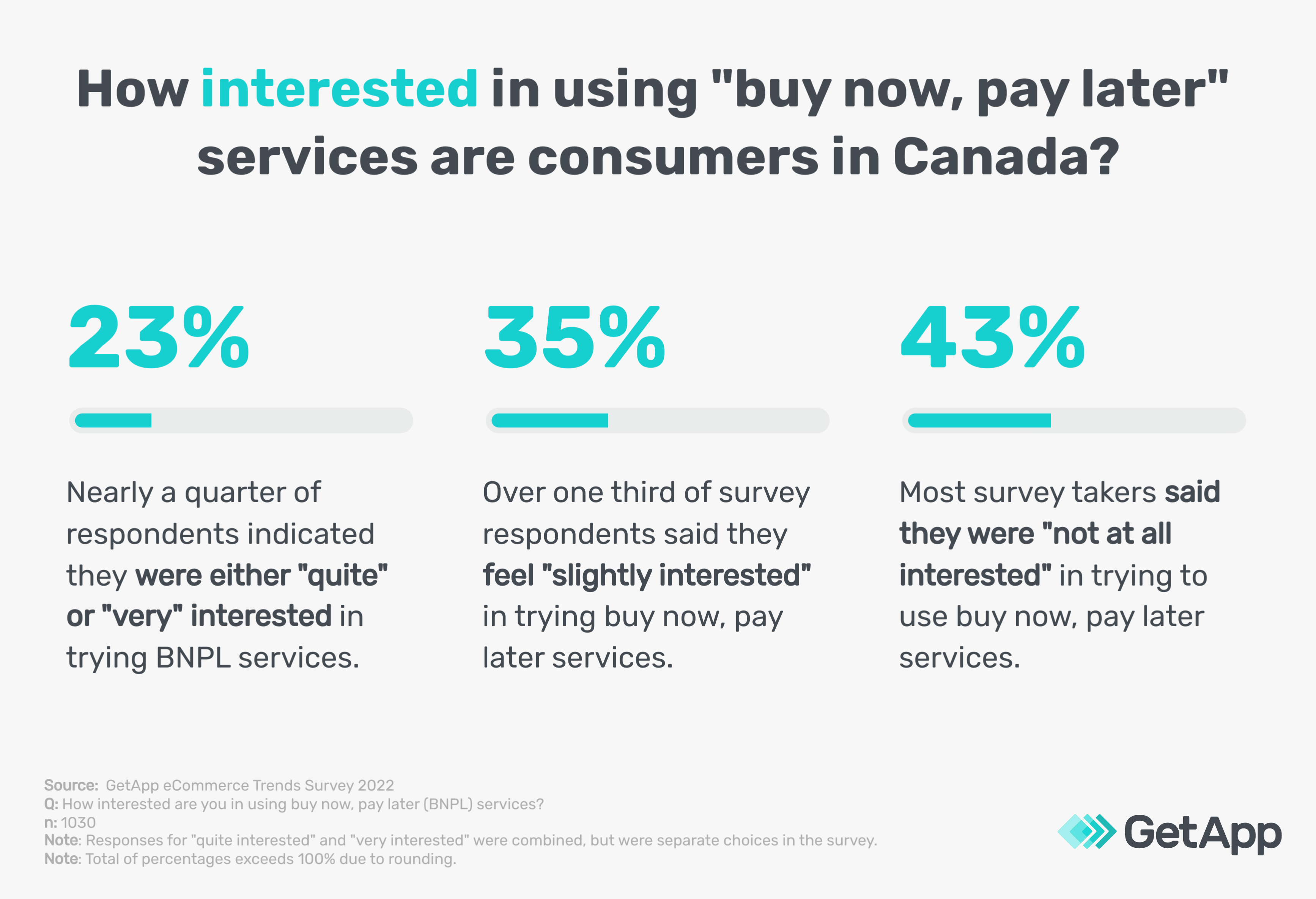 Why do people use BNPL?

The BNPL users we surveyed used the services to buy a wide range of goods and services. The most popular type of purchase (made by 41% of BNPL customers in our survey) was for home goods and furniture— expensive items that have traditionally been offered with financing in the past, including at brick-and-mortar stores. Fashion, clothing, and shoes (35%) and electronics (29%) were also popular types of purchases for which BNPL services were used.

However, there was no overwhelmingly clear reason why customers chose to use BNPL. Some (19%) did so for budgeting purposes, 16% used it to enable them to make an expensive purchase, and 11% were attracted by the zero interest rate and the fact they could defer initial payment. Overall, BNPL users gave at least 11 reasons for using BNPL. 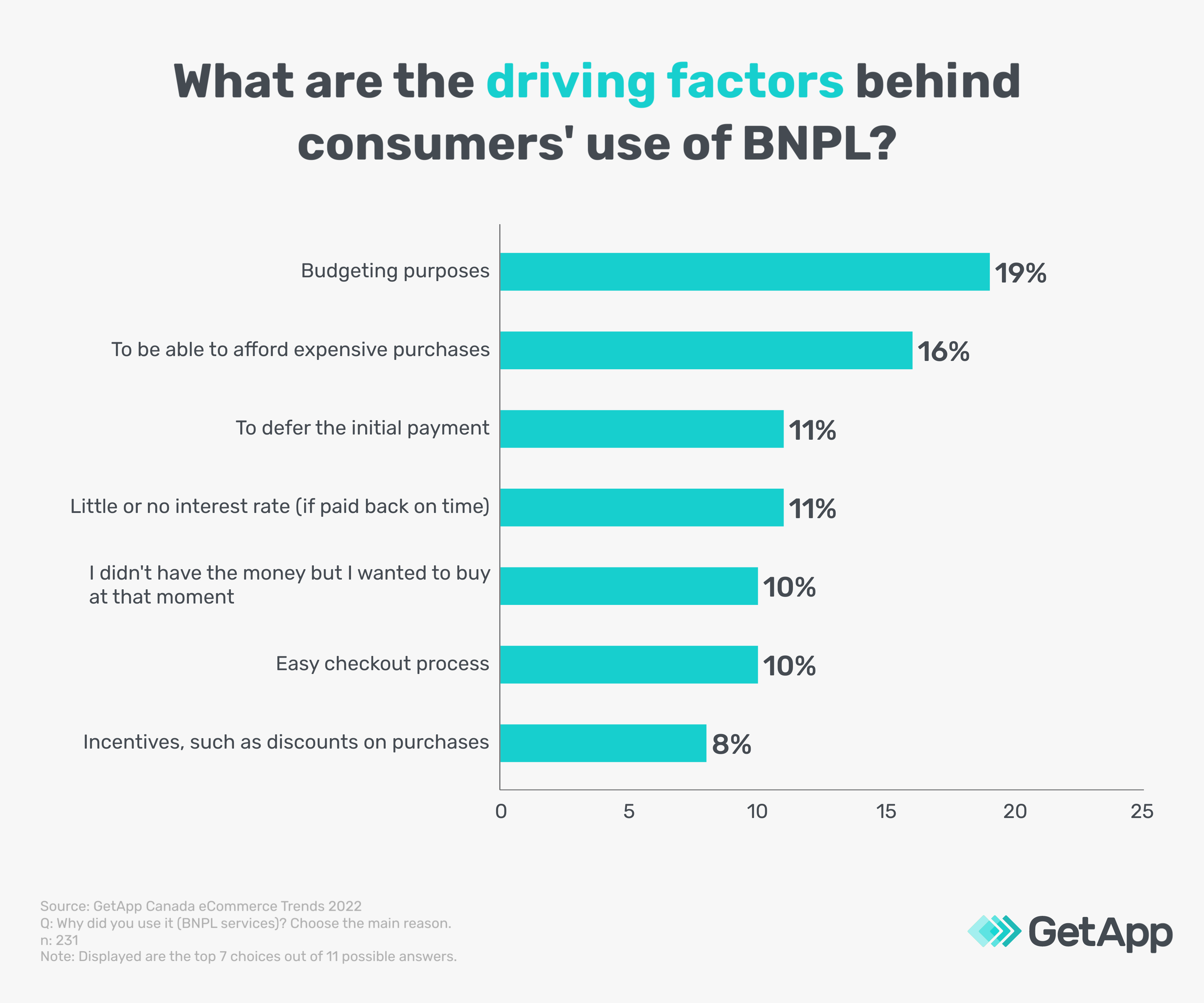 Furthermore, many BNPL users said that the availability of instant credit would make them more likely to make unplanned purchases— 16% said this was ‘very likely’ and 32% ‘somewhat likely’.

Continuing the general favourable perception of BNPL among those who used it, 57% said they saw no downsides. However 13% said it was difficult to return or change their order, and 12% said they saw unexpected surcharges.

The vast majority (91%) said they had managed to pay back their BNPL purchases on time. But of the 9% that didn’t, the consequences included late payment fees, warnings, and being unable to use the service again.

How do consumers in Canada feel about credit?

The consumers we surveyed appear to be comfortable about accruing debt in some capacity. Excluding their mortgage, 47% said they currently have debts of some kind, and a further 23% have had debts in the past.

This doesn’t necessarily mean that consumers felt unable to manage their money. Most in our survey felt they had good oversight of finances, saying they managed them ‘very well’ (29%) or ‘well (31%).

However, using credit to make purchases isn’t without its risks, and consumers report misgivings about doing so over the internet. 17% say they are ‘quite concerned’ when using credit or loaned money to make online purchases, while 8% are ‘very concerned’.

What reservations do people have about BNPL?

The majority of people in our survey have not used BNPL, and it is worth asking why. Again, reasons vary, and there is no general aversion to taking out credit per se. 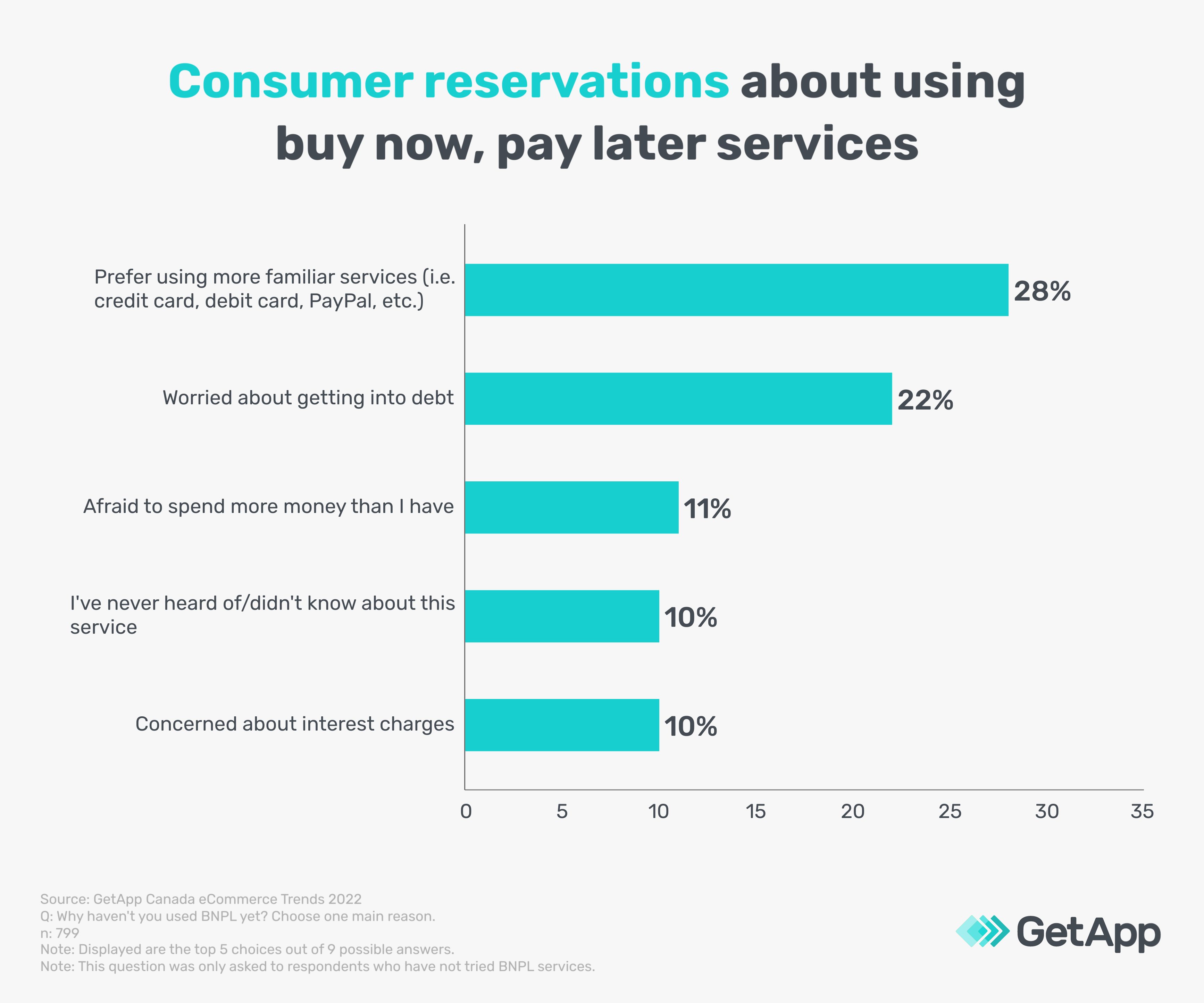 The most popular reason for not using BNPL was that consumers are more familiar with existing payment (and credit) options, including credit cards, debit cards, and PayPal. 28% of non-BNPL users agreed with this. 22% said they were worried about getting into debt, which reflects the fact that some consumers are averse to using credit at all. Similarly, 11% were “afraid to spend more money than [they] have’ and 10% were concerned about interest charges. Only 10% had not heard of BNPL or didn’t know about it, pointing to a remarkable level of awareness among consumers overall.

Even among non-BNPL users, there was high recognition of the benefits of such services. Only 19% said they saw ‘no benefit’, while more than one-third (37%) said that the zero or low interest rates (if paid back on time) are an important advantage. This was followed by the ability to afford expensive purchases and budgeting purposes (both 31%).

Like any credit service, BNPL can enable consumers to rack up unmanageable debt, and so we asked all participants in our survey if BNPL services should be subject to any regulation. 44% said they would like to see spending limits in place, 42% said they would like security measures (like two-factor authentication), 39% credit rating checks, and 38% think there should be age restrictions. 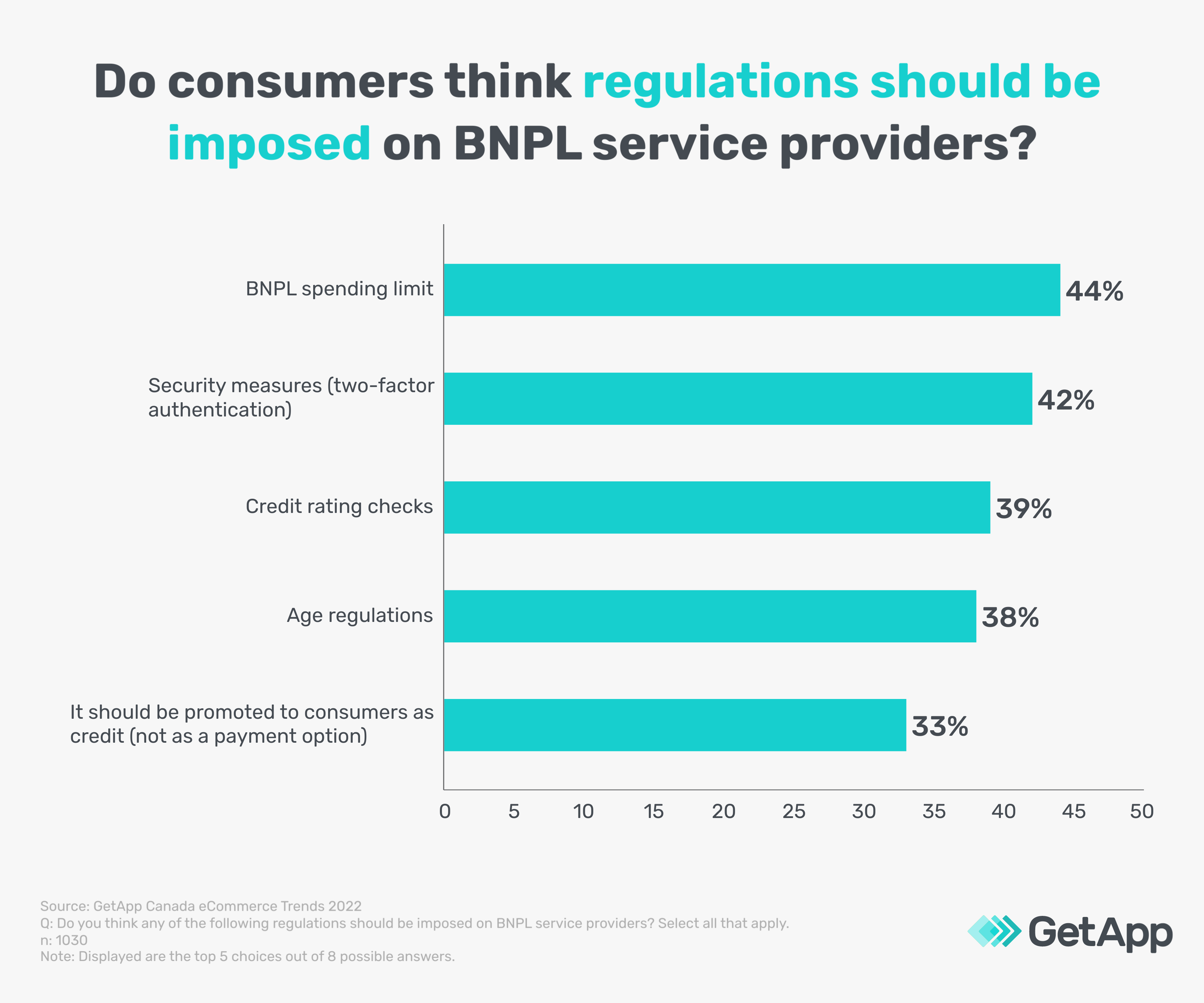 Did you know? The Financial Consumer Agency of Canada is actively monitoring the evolving BNPL market and its ‘potential negative consumer outcomes’. Based on initial research, the agency concluded that consumer experiences were largely positive with some potential risks highlighted.

The FCAC doesn’t recommend specific regulations at this stage, but that is not to say that BNPL lending is not subject to any restrictions. Depending on the province or territory, limits may be in place regarding who can access credit (based on their age, for example) or how credit is advertised and offered at the checkout.

Our survey suggests that consumers in Canada are comfortable with credit on the whole and are open to the idea of using BNPL services, although the actual uptake is low compared with the numbers using credit cards.

Market share appears to be split among many BNPL providers, and shoppers use these providers to make a large range of purposes, suggesting an overall openness to the concept.

Those that used BNPL were prepared to use it again, and the data suggests that the availability of BNPL makes them more likely to make impulse purchases in the future. However, SMEs may struggle to persuade consumers to switch over from more familiar forms of payment like credit or debit cards and PayPal.

Methodology:
To collect data for this report, GetApp conducted an online survey in April 2022. Of the total participants, we were able to identify 1,030 respondents who fit the following criteria: