As the world becomes increasingly digital, small businesses are feeling the pressure to adopt new technologies. The COVID-19 pandemic has also had a large influence on the digitalization trends of SMEs. With the growing demand for digital businesses, the government of Canada has launched the Canada Digital Adoption Program (CDAP), investing $4 billion in plans to help companies boost their digital capabilities. 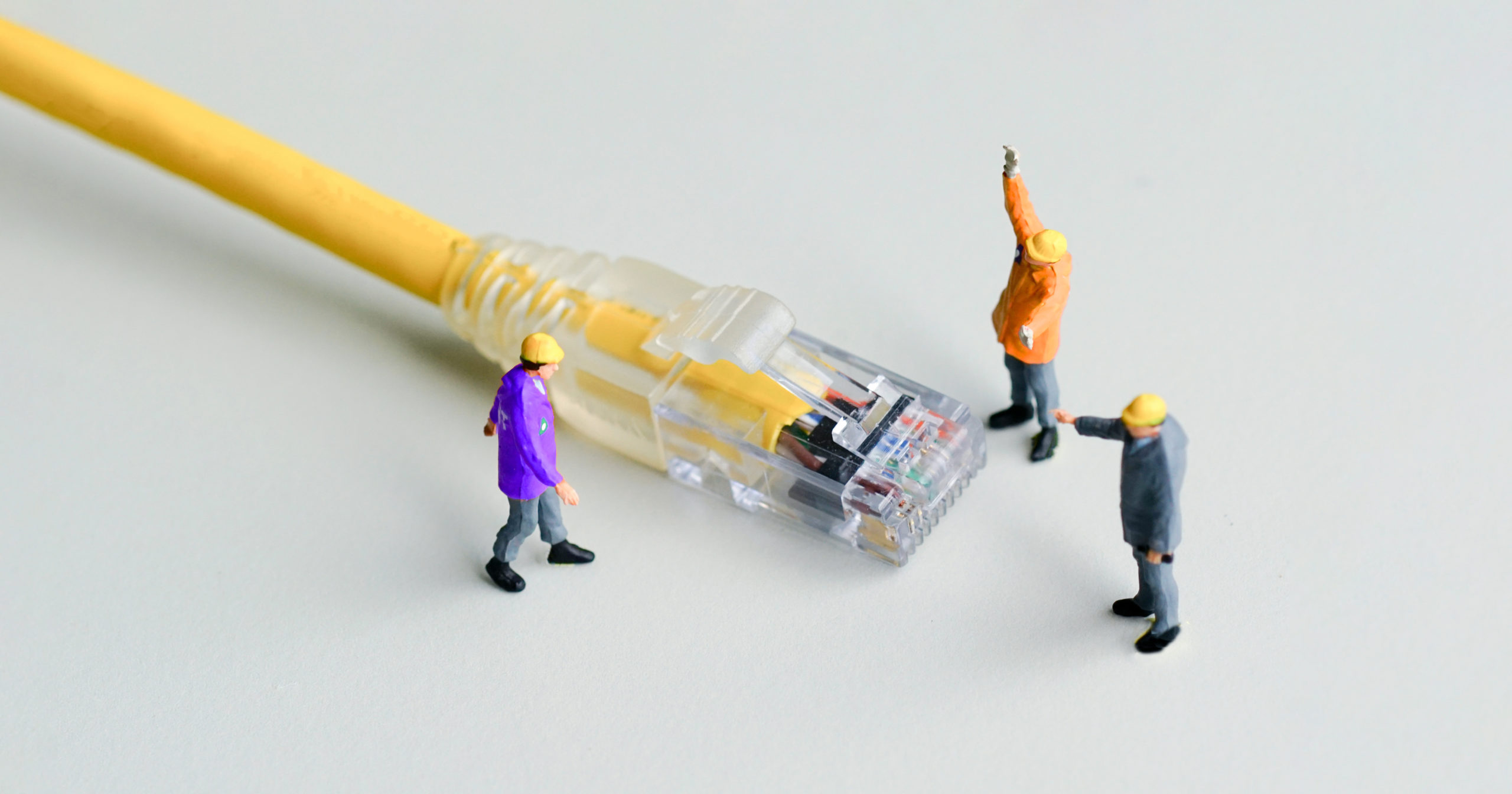 Despite the CDAP being announced in July, over half of the managers surveyed (52%) in our recent digitalization survey have never heard of this program. Only 13% of business leaders reported applying to participate in Canada’s Digital Adoption Program.

We wanted to find out what SMEs in Canada understand about digitalization, what the current trends are, and how businesses can use software — such as digital adoption platforms, cloud storage, and team communication tools— to help with their digital transformations. To learn more, GetApp surveyed 200 executive-level professionals and over 800 employees of digitalized companies across the nation (scroll down for the full methodology).

Before we dive into the highs and lows of digitalization trends in Canada, it’s important to understand the definition of digitalization. Digitalization is the employment of digital technologies to change or improve business procedures. This could refer to reorganizing a business model, tapping into new revenue streams, or optimizing existing processes.

Although the terms are often used interchangeably, there is a difference between digitalization and digitization, with the latter referring broadly to the conversion of information from analog to digital (i.e. typing handwritten data into a computer). Furthermore, there is digital transformation, which is an umbrella term for any initiative that introduces new or modernizes existing digital aspects of business. 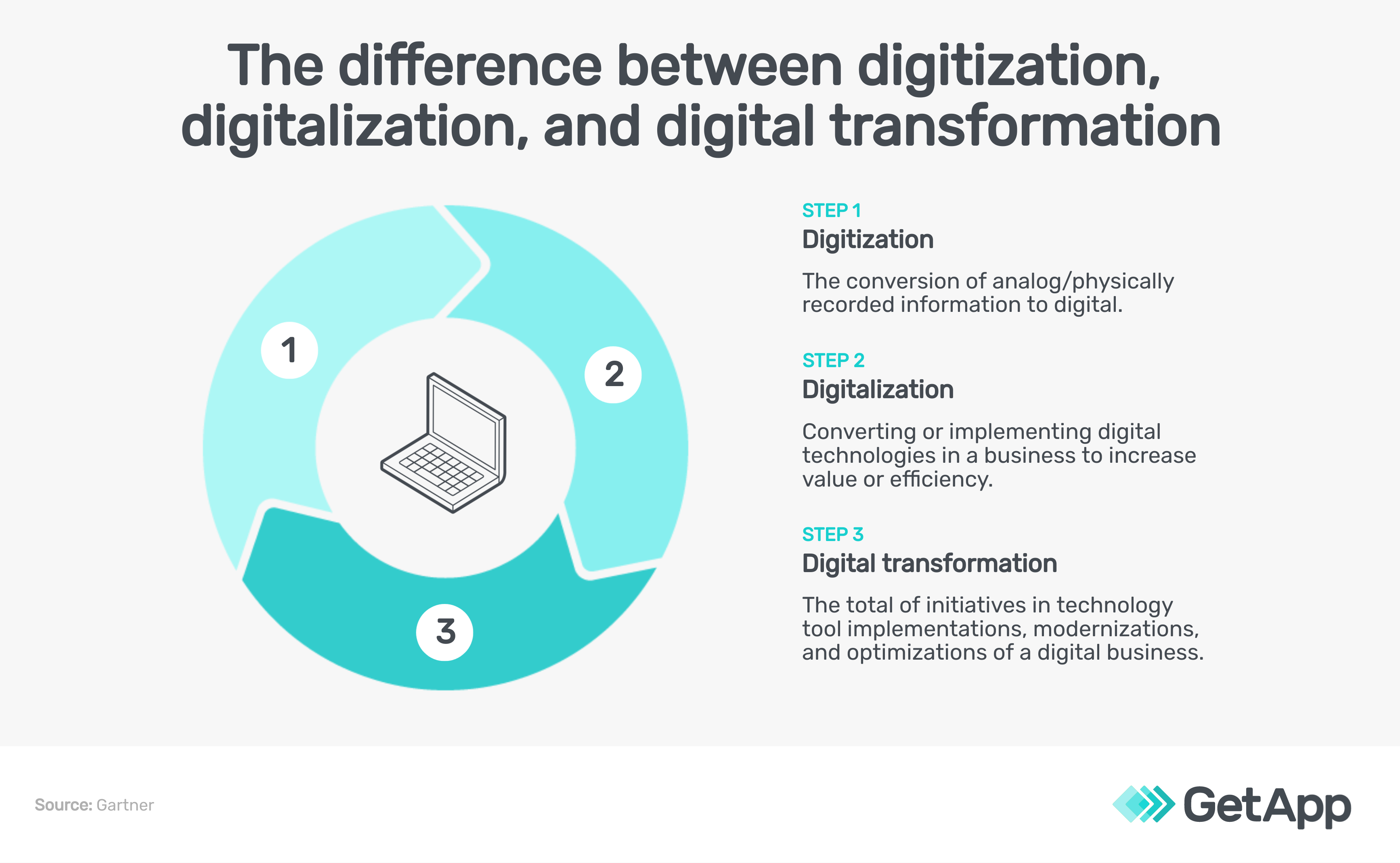 Most employees are only slightly familiar with digitalization

While the Canada Digital Adoption Program aims to equip SMEs with competitive digital skills, businesses may find it hard to source employee support for these initiatives. Nearly half (49%) of employees surveyed were only slightly aware of the concept of digitalization and almost a quarter (22%) had never heard of it. Only 30% of employees said they definitely understood digitalization, showing that companies may need to invest in educating employees on the importance of digital adoption.

Getting employees on board with a digital adoption strategy may be as easy as explaining these strategies to newer employees (perhaps during onboarding), as those with lower experience levels show less awareness of the concept. Only 22% of junior-level respondents definitely knew about digitalization, while only 6% of trainees reported the same confidence in their knowledge. 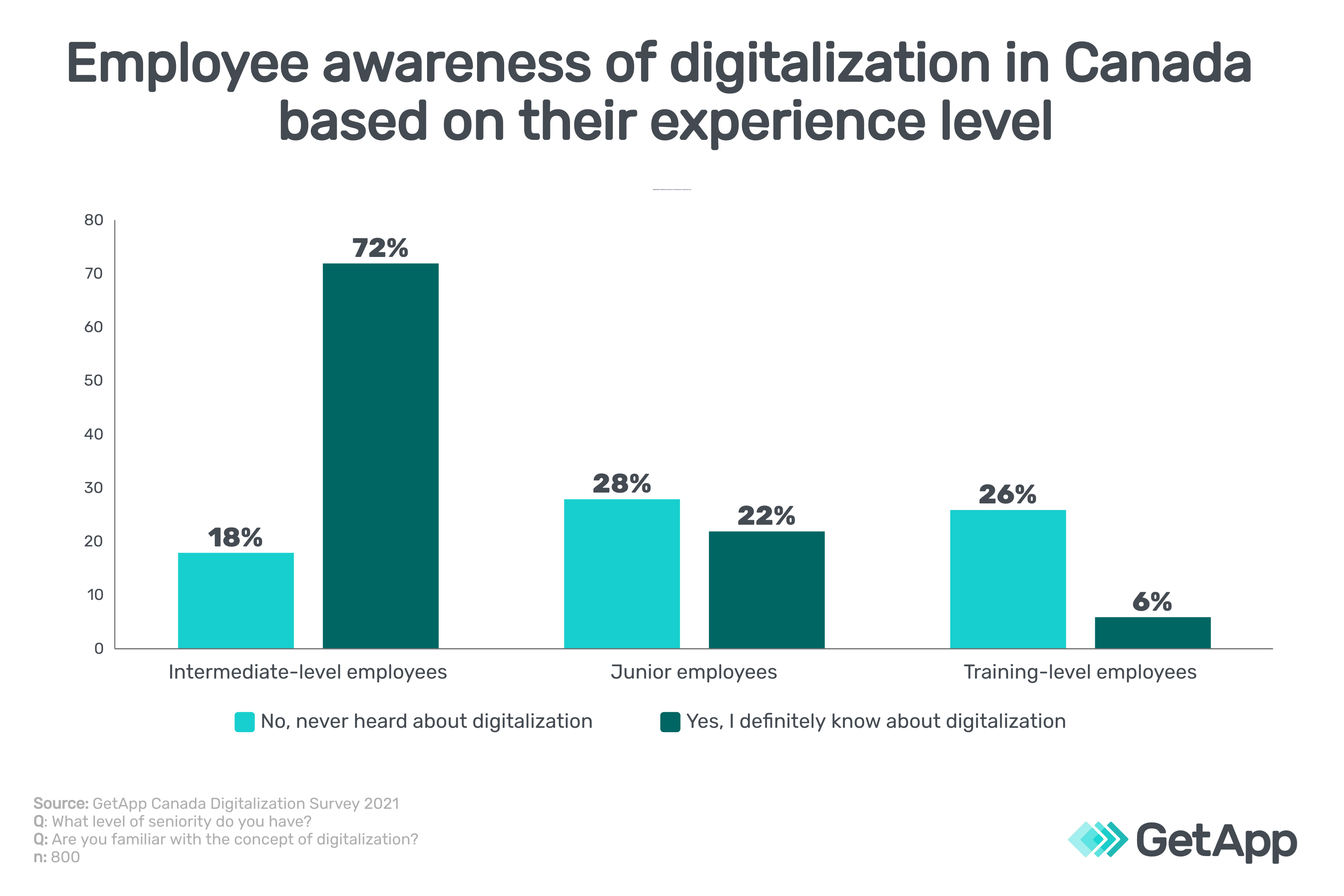 Which industries struggle most to understand digitalization?

Most common industries of those who had never heard about digitalization:

Most common industries of those who ‘definitely know’ about digitalization:

The transport and trade industries suffered great losses during the pandemic, as well as the charitable sector, which struggled to keep up with demand for services. While the effects of the global pandemic are to blame, it’s likely that a general lack of knowledge about digitalization in these sectors contributed to business challenges.

On the other hand, the industries which showed the highest awareness of digitalization were those that rely on digital skills to carry out at least some part of their work. The business resiliency that comes along with digitalization may be why these sectors haven’t experienced the same drawbacks as others.

Almost 3 out of 4 managers say the pandemic influenced digitalization

Nearly 3 out of 4 survey respondents (71%) in decision-making roles said the COVID-19 pandemic influenced their company’s choice to make more processes digital. Of these respondents, 37% reported digitalizing to make work easier during the pandemic. 34% of managerial respondents say new digital processes were necessary for their business’s survival during this time. 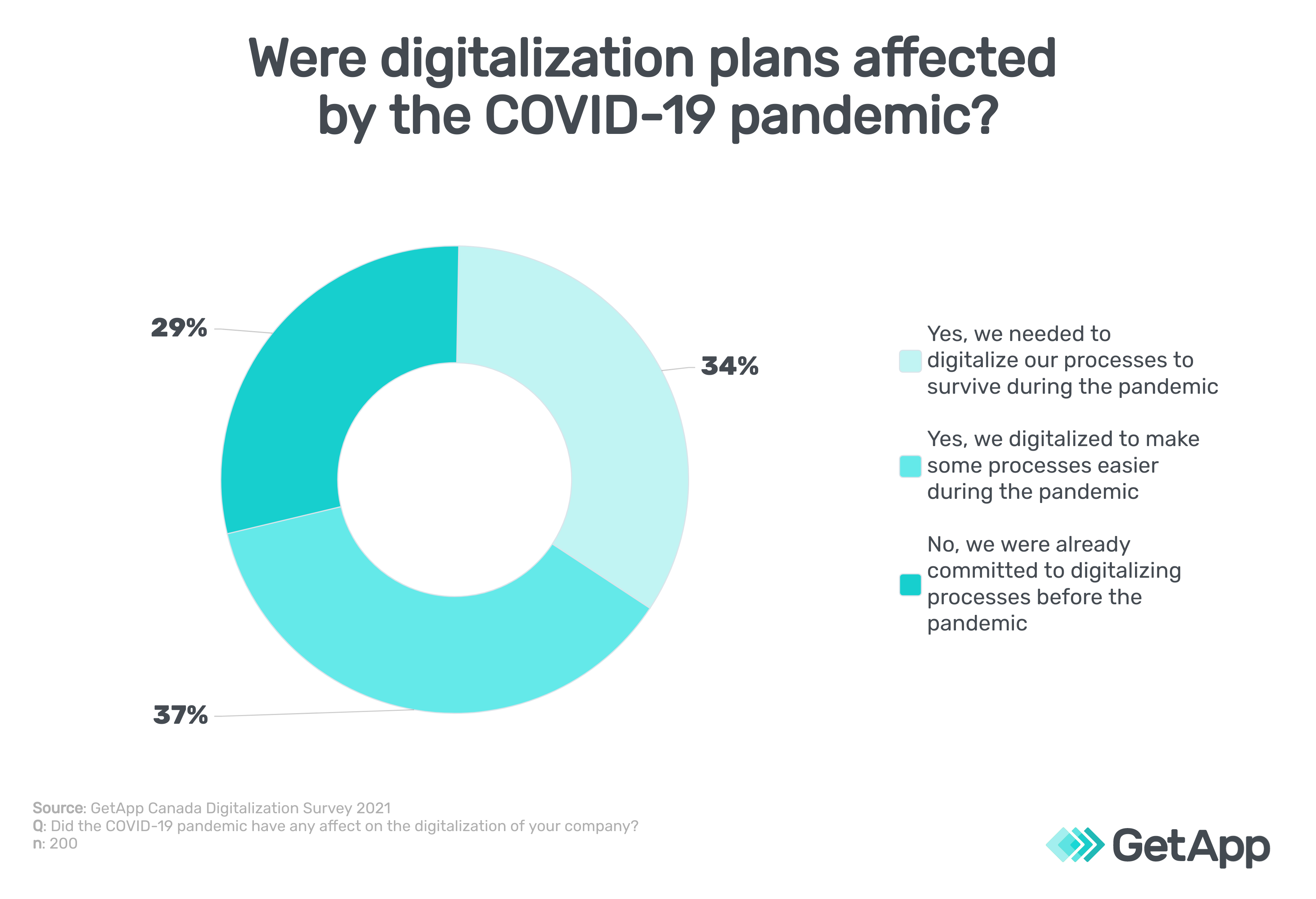 Even though the COVID-19 pandemic is levelling off around the country, there’s no going back on the route to digital transformation. Nearly half of the managers surveyed (49%) report they won’t be getting rid of any of the new technologies adopted during the pandemic. Only 17% of executives plan to eliminate at least one technology, while 35% plan to replace or upgrade at least one software as they continue creating digital workplaces.

What are the technologies driving digitalization trends?

The following are the next most commonly implemented technologies amongst digitalized workplaces:

While the functions of these tools differ, they do have one thing in common: they provide remote access to vital business processes. During a pandemic where physical distancing is vital, these tools have enabled employees to meet and share information and data safely. As most managers have also shown they have no plans to get rid of these technologies, it seems the digital way of working is here to stay. 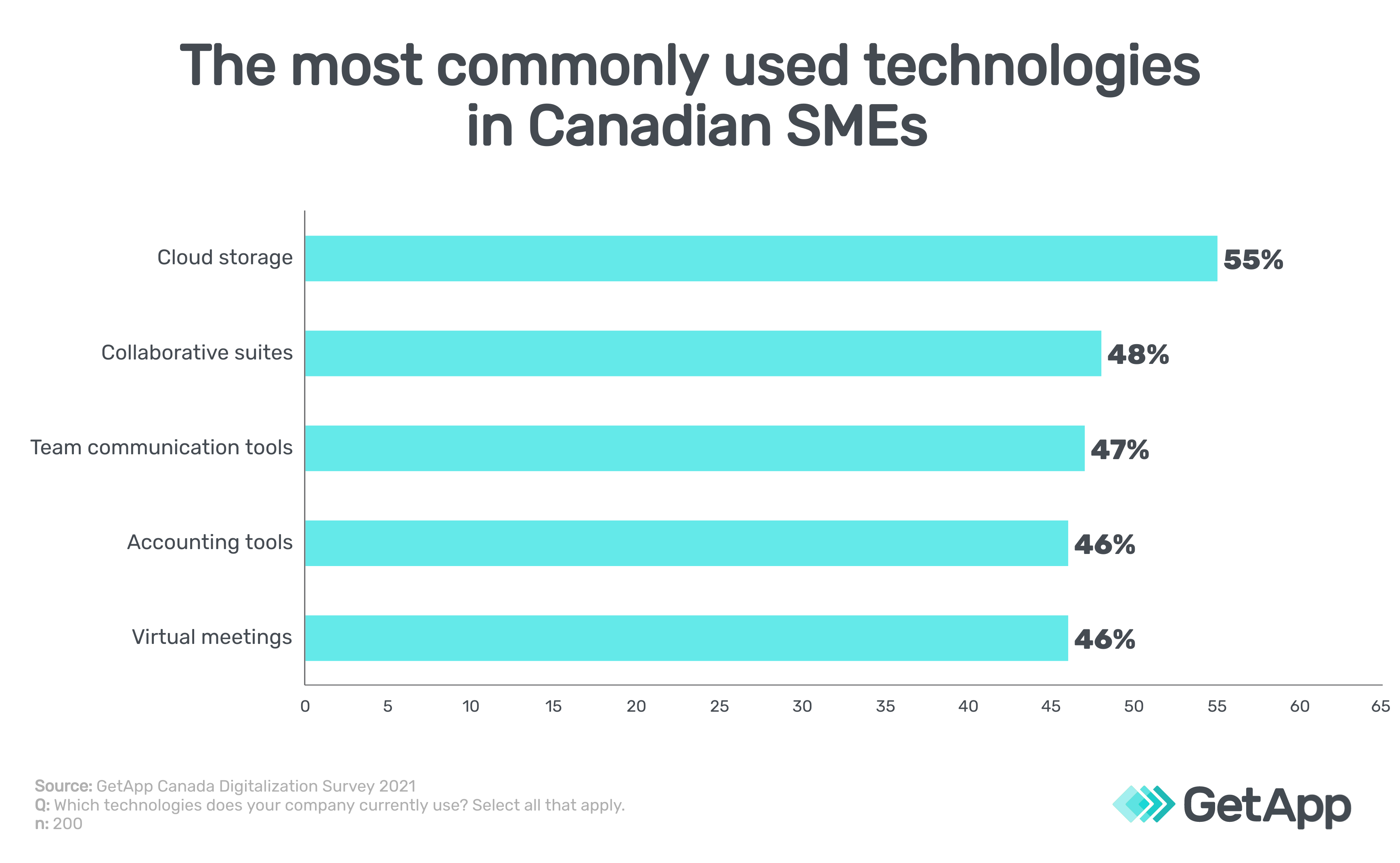 When it comes to employee impressions on their digital workplaces, the differences in opinion seem to be based on age. The majority of employees between 18-22 years of age (49%) considered their workplaces to be minimally digital. Most 23-35-year-old survey respondents (45%) thought their workplace was moderately digital, as did most 36-55-year-olds (48%). Employee respondents of ages 65 and above (50%), however, tended to see their workplaces as extremely digital.

Not only do younger generations have higher expectations of what a digital workplace actually is, but these groups also tend to prioritize highly digitalized environments. When asked if the presence of digital processes would influence their choice of job, only 16% of 18-22-year-old respondents say it would not matter. In comparison, 27% of 56-65-year-old respondents felt the same indifference, suggesting older generations care less about the digitalization status of their company.

Age not only plays a role in employee outlook on digitalization but also in their adaptation to new digital processes. Over a third of 18-22-year-old respondents (37%) thought their company’s digital workflows were very easy to navigate. In a decreasing trend, 34% of 23-35-year-olds felt the same ease, while only a quarter of 36-55-year-olds (25%) felt as comfortable. 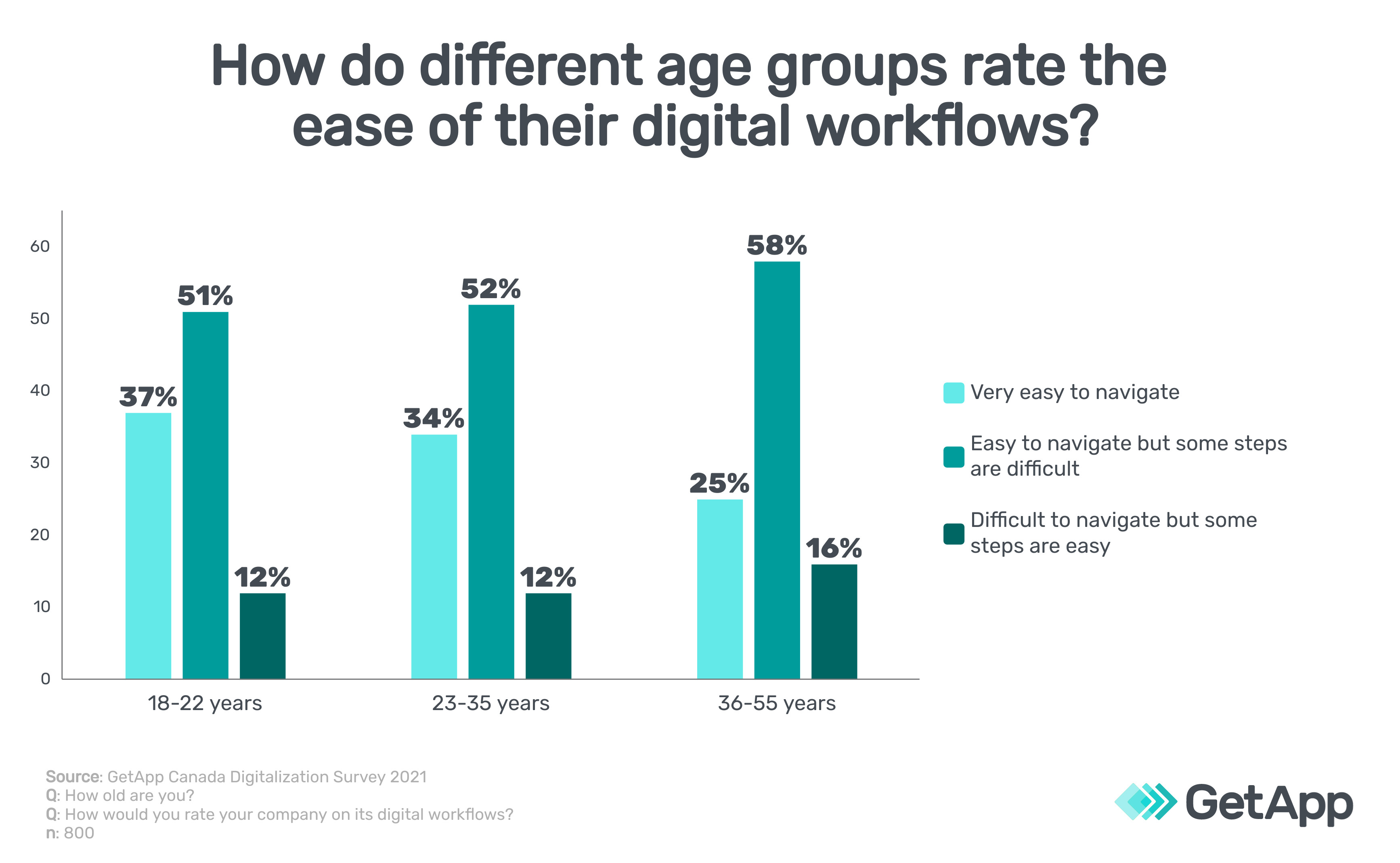 Organizations preparing to undergo digital transformations should bear in mind that some employees may need additional support and training. A learning experience platform can help businesses provide personalized learning paths and digital training programs to employees.

Digital workplaces should be tailored to business needs

As SMEs across Canada work on digitalization, it’s important to remember that there is no one-size-fits-all solution for digital transformations. Digital business needs depend on the type of business, the industry, and the age range of employees, among other factors.

What small to midsize enterprises must always take into account are the most urgent needs of the organization, in order to seek the technology solutions that can best serve them. Companies looking to diversify or improve their digital workflows should start with digital adoption platform software that provides educational support on new tools as well as in-depth usage reports on the efficiency of implemented technologies.

To collect the data for this report, we conducted two online surveys in October and November 2021. Of the total respondents to the employee-focused survey, we were able to identify 800 Canadian respondents that fit within our criteria:

Of the total respondents to the manager-focused survey, we were able to identify 200 Canadian respondents that fit within our criteria: